*Any orders placed on or after Monday December, 15th 2014 are not guaranteed to be to their destination by Christmas.

Those numbers you spot when shopping for wine? That’s a wine’s “score,” and it relays how that particular bottle’s characteristics fare within a set wine point system standardizing the wider industry.

What is the point system used for wine? Where did it start, who gives the ratings and how do points affect pricing, production and more? And — perhaps most importantly — should you even care about wine ratings in the first place?

Get the 4-1-1 on the 100-point wine scoring system with this guide — ideally, while you’re sipping your favorite varietal.

What is the wine point system, and how does it work? The wine rating scale is a 100-point-based system. A higher score reflects a consensus from various wine experts that a bottle is of excellent quality, whereas low scores — logically— denote an average or less-than-stellar bottle.

Wine ratings are more a point of reference than an official decree. Consumers like you can use the numbers to weed out specific bottles when browsing wine in a store or online, to compare identical varietals from different producers or to have fun testing your palate against the “experts.” In any case, wine ratings are ultimately subjective — a helpful tool to take and use as you wish.

How Did the 100-Point Wine Rating System Begin?

The wine rating system out of 100 that is so well-known today began in the 1980s, when respected wine writer and critic Robert Parker established a scorecard to review his wine-tasting assignments consistently.

Parker’s approach was pragmatic. Given the many characteristics expressed in a single glass of wine — and the amount of wine his job required him to taste — Parker needed a standardized system to base his judgments on. According to lore, he used a familiar, school-based grading scale as inspiration for his methodology. Like a math or spelling test, grades in the 90s or above are exceptional, while 80 to 89 are passing or above average and wines below 70 are a miss.

Initially, fellow wine critics admonished Parker’s scorecard for oversimplifying the wine-tasting experience. However, Parker’s method soon gained traction across premier publications like Wine Spectator, Decanter, Wine Enthusiast and many more, leading to its establishment as the leading wine-scoring and -ranking system used globally. Consumers and critics alike benefit from the numbers-based approach, giving a shared understanding behind the definition of a “good” bottle of wine.

Today, a high score — think 97 points or above — from a premier wine publication can be life-changing for the wine’s producer, bombarding them with orders and radically altering the production, scale and name-brand reputation of their vineyard.

The Purpose of the Wine-Scoring System

The idea behind a wine-rating scale is functional: to standardize wine-tasting information and consumption. Standardization does not mean to make the world of wine boring and uniform, or to remove the nuance, complexity and individual preferences and experiences associated with a successful wine tasting. Instead, the scorecard provides a quick and straightforward way for critics and consumers alike to have realistic expectations about their wine purchases.

Think of the 100-point wine-rating scale as a Rosetta Stone for communicating wine. Across languages, varietals, regions and tastes, the point system used in wine ensures everyone has an understanding of a bottle’s quality.

How Are Wines Rated and Scored?

How is wine rated with points? The 100-point wine-scoring system breaks down as follows.

This numeric system relies on a bottle of wine receiving enough reviews from major wine publications, sommeliers, food critics, renowned wine blogs and others in the industry. The longer a bottle has been in production, the more reviews it’ll amass.

Together, a bottle’s scores across publications and reviews translate into that number you see when shopping for wine. Most liquor stores either advertise the rating from one specific publication such as Wine & Spirits Magazine or Wine Spectator, or will calculate a bottle’s average based on several publications’ reviews.

Critiques of the 100-Point Wine-Rating System

The 100-point wine rating system is not perfect. Many have pointed out that wine rated with rote numbers courts several inconsistencies, including the following.

There are several major players in the wine industry responsible for generating the numeric scores you see when shopping for wine.

Wine scoring occurs continually with publications and wine critics alike. Regardless of who’s performing the tasting, though, the wine-rating methodology goes as follows.

An Essential Note on the Wine-Scoring System

In general, wine publications tend to provide scorecards for their reviewers to help standardize results and provide the most objective tasting possible.

However, reviewers can still introduce additional rubric elements, as well as note other subjective qualities not included on a set scorecard. The industry encourages tasters to prioritize the following during a formalized wine ranking:

Continue reading to understand how the wine point system works on a more profound level — specifically, the exact criteria tasters use to formally rank wine.

What’s a Wine’s Score Based On?

Parker’s 100-point wine-rating system emphasizes the following traits. Explore each characteristic the next time you open a bottle of your favorite cabernet sauvignon or chardonnay— or that never-before-tried fancy French Chenin Blanc you picked up just because.

A wine’s appearance is a broad, but essential, opening category when rating a bottle.

To appropriately gauge appearance, tasters will hold glasses by their stems, raising wine to eye level. Doing so allows a reviewer to assess the following.

A wine’s consistency, often referred to as its “mouthfeel,” is a broad term that identifies how a wine feels on your tongue as you drink. The most common traits associated with a wine’s mouthfeel or consistency include the following.

A wine’s “nose” refers to how it smells, or its total olfactory profile.

Tasters use two primary categories to identify a good-quality nose on a glass of wine, as well as the complexity and balance of these overall smells. 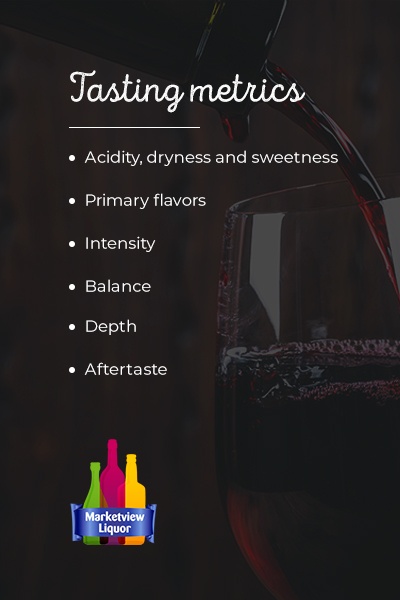 Taste is one of the defining qualities for rating wine — for understandable reasons. What reviewers taste will be subjective, but rating scorecards outline a few definitive tasting metrics.

Another broad, but essential, term, complexity refers to how dynamic a wine’s drinking experience is. For example, a complex wine will display several primary flavors and aromas alongside appropriate tannin levels, acidity, sweetness and alcohol, wrapped up in a long-lasting, balanced finish.

Critics use wine complexity as a bit of a catch-all. In general, complexity describes the overall impression a wine leaves you with. While imprecise and open to subjectivity, it remains a critical factor in the wine point system.

Experts will also consider how well a bottle represents its varietal, or the grape types used to make it.

Every grape varietal contains a unique set of characteristics. Well-trained palates learn to discern these core characteristics and can often identify a varietal blindly, without anyone telling them what type of wine they’re drinking. Those holding advanced sommelier certificates must undergo several rounds of such blind taste tests before earning their accolades.

When rating wine, drinkers must have some background on the nature of that varietal to compare the individual bottle to. This knowledge gives credence to the final rating, signifying a bottle is an excellent representation of its namesake grapes.

Last but not least, wine reviewers can make notes on how they believe a winery could improve its product. While this stage of a wine ranking does introduce personal bias, esteemed critics and publications take every precaution to be specific in their suggestions, recommending improvements that are fair and actionable, rather than pure opinion.

Remember that you, as a consumer, get the final say on wines to enjoy. The rating scale is merely a reference tool meant to help distinguish and discern bottles amid the sometimes overwhelming choices available to consumers today. All tastes and scores are, ultimately, subjective — never a mandate signaling to drink or not to drink.

What If a Bottle of Wine Doesn’t Have a Number?

Unrated wines do not mean a bottle is so bad it doesn’t deserve a number. Instead, wines without a rating can be due to several situations:

How to Pick the Best Wine

Selecting the best wine possible doesn’t need to be complicated. Keep in mind any of these wine-choosing tips and tricks next time you’re shopping for a few bottles, then feel more confident with your purchase.

Only after these considerations should you reference a bottle’s point ranking, ultimately going with your gut.

Explore the Wine Point System for Yourself

Take all wine point systems and ratings with a grain of salt. The wine world is constantly evolving, as are the trending flavors and varietals. In the end, a good wine is one you enjoy drinking. It’s that simple. Really.

Use our “By Points” filter to shop for wines based on critical ratings. Or, browse our extensive online wine catalog according to other preferences like wine type, price, region — even case discounts for select bottles.

You must be of legal drinking age in the United States to access this site. Marketview Liquor does not condone the purchase of alcohol by any minor or persons under the age of 21. Please drink responsibly and it is never acceptable to drink and drive.

You must be of legal drinking age to enter this site: