However, if you’re like most people and don’t carry a sommelier certificate, it can be hard to distinguish between the two. Cabernet sauvignon and merlot share many similarities to the naked eye, but their sips can carry vast, subtle differences for the discerning tongue to untangle. The two wines also have different food pairings despite their similarities.

Learn some terms and descriptions commonly used when wine tasting to help you better understand the differences between merlot and cabernet sauvignon. Then, appreciate the rich heritage between these two delicious red wines — and impress your friends along the way — with this in-depth cabernet sauvignon versus merlot guide.

Cabernet sauvignon hails from the legendary wine region of Bordeaux, France. Its grapes grow best in warmer, milder climates. Vineyards grow them in nearly every wine-producing area of the world, from the mountain foothills of Chile to California’s golden groves to Australia’s outback vineyards.

Cabernet sauvignons grapes carry medium-to-high tannin levels. The high tannin levels mean this grape varietal produces a bolder, mouth-drying base. Tannins interact with the proteins in your saliva to cause the astringent drying sensation you’ll notice while drinking a cabernet sauvignon. The tannins found in wine will soften and become less abrasive as the wine ages. Winemakers can also coax additional fruity and earthy flavors for their cabernet sauvignon bottles.

On-the-vine cabernet sauvignon grapes are a distinct periwinkle blue. Once picked, fermented and bottled, a glass of cabernet carries a lush, deep red burgundy coloration with a noticeably lighter scarlet rim. The grapes have a high skin-to-pulp ratio, which is the primary factor in the dark color you see in a cabernet sauvignon. Other cabernet sauvignon color notes include:

Cabernet sauvignon is a full-bodied red wine. It tops the list of robust red varietals, carrying some of the lushest, thickest sips that will coat most of the mouth and linger. Many describe cabernet sauvignon’s body as unctuous, gravelly, rich and deep. The region the grapes grow in will also impact the wine’s body. A cool-climate cabernet sauvignon will be drier and have more noticeable notes of herbs and vegetables than a warm-climate varietal, which will taste more of ripe fruit and spice. Its full-bodied composition also means this wine type:

One of the defining features of cabernet sauvignon is its bell pepper aroma. Decanting a fresh bottle of cabernet sauvignon will introduce the nose to notes of peppers, cassis, dark chocolate, peppercorns, pencil shavings and figs. The aroma may remind you of being deep in a forest or sitting around a campfire due to the wine’s time spent aged in oak.

However, don’t let its earthy and savory-leaning bouquet mislead you. Drinking a glass of cabernet sauvignon will also present mild fruit notes, most notably black currants and ripe dark berries. Read more on the fruity versus dry flavor profiles of cabs below.

Unblended, pure cabernet sauvignon is a medium-acidity wine. The wines carry a pleasant amount of pucker and tart that hits your tongue upfront before giving way to its earthier and sugary notes.

Cabernet sauvignon is one of the driest red wine varietals on the market — indeed, they’re one of the driest wines altogether! Thanks primarily to its robust body, a sip of cabernet sauvignon will feel denser and heavier on the tongue, therefore creating that familiar, mouth-drying sensation from the high amount of tannins. Cabernet sauvignon has very little residual sugar because winemakers allow the yeast to ferment for long periods and consume the sugar. The lack of sugar is what creates a dry wine.

Cabernet sauvignon’s bold, full body and high tannin count are the one-two punch behind its moderate to intense strength. Depending on the soil quality where the grapes grew, its maceration techniques, oak processing and aging amount, the balance between a cab sav’s vegetal, spice and fruit notes will vary. A French cabernet sauvignon is likely to be much earthier and more robust than a more fruit-forward Argentinian varietal. One thing is sure, though — you’ll get nuance in a good bottle of cabernet sauvignon, presenting you with a rich-tasting glass of wine great on its own or paired with food.

Cabernet sauvignon is a red wine whose flavor profile blends savory with pops of fruit. Of those fruit notes, flavors and aromas skew more toward wild, foraged and tart produce. You’ll taste things like:

Winemakers allow most cabernet sauvignons to age in oak barrels. However, the oak-aging process aims to finesse the tannins present within the wine, since oak barrels also contain tannins that affect a final bottle’s flavor. The aging process mellows the tannins naturally found in the cab sav to produce a wine that isn’t as overpowering.

Like many other wine grape types, merlot calls the Bordeaux region of France home. Cultivated in the late 1700s, merlot grapes are a younger varietal in the red wine family. However, merlot wine marries unique elements of sweetness, smoothness and spice unmatched by most other varietals, catapulting it to a flavor profile all its own.

A glass of merlot contains low, subtle amounts of tannins, particularly compared to other red wines like a Bordeaux or cabernet sauvignon. This low tannin count is a significant contributor to merlot’s silky, fruit-forward taste instead of a mouth-drying full-bodied pour. There are still some tannins present in merlot, though. If you’re sensitive to tannins or don’t like the dry mouthfeel, a pinot noir or a grenache are two reds with lower tannin levels.

Merlot wines come in a signature ruby red. Their centers are darker and opaque, with little light passing through. As merlot ages, its colors and cores will further lighten to a garnet color.

A standard glass of merlot will also carry sharp rim variation. Merlot rims have a distinct orange edge — a color not often present in other red wine types. Other color distinctions for merlots include the following.

Merlot carries an airy, refreshing but fragrant body. Sips will hit the front and center of your tongue, then quickly glide away, leaving traces of sweet summer fruits. The overall effect is a red wine type with delightful suppleness, drinkable by itself or paired with a wide range of foods.

Merlot counts as a full-bodied wine because of its high alcohol content, typically above 13.5%. Despite its full body, a merlot is still easy to drink because of its lower tannin levels.

Smell a glass of merlot, and you’ll experience scents of cherries, raspberries, licorice, plums and espresso. Its fruit-forward palate is one of merlot’s most defining characteristics. However, those grown in cooler climates like classic French merlot carry slightly more structure, adding earthier upticks like tobacco, mocha and cassis to smells and sips.

When it comes to acidity, merlot sits in the middle of the red wine pack. It displays refined pops of sweet and tart, softened by the lower tannin count and medium-light body.

Merlot has a dry flavor profile with virtually no residual sugar left after fermentation.

However, merlot’s dry versus sweet classification can be confusing to novices. Even though merlot is a fundamentally fruit-forward red wine, it lacks a defining sugary-sweet aftertaste. Consider what it’s like to eat a strawberry-flavored piece of candy versus an actual strawberry to illustrate the difference. The former is overtly, almost syrupy sweet, while the latter is much more delicate. Merlot is low in sugar, but the fruity aroma helps trick the brain into thinking it tastes a touch sweeter than it is.

A merlot’s strength depends on whether it comes from a warm climate — such as a Californian merlot or an Australian merlot — or a cool one — such as a French, Italian or Chilean merlot varietal.

Both warm and cool-climate merlots contain a characteristically silky finish. Merlots maintain that signature smooth, even and velvety balance from the tip of the tongue to the back of the throat, providing a mellow end to each sip

Merlots are among the most fruit-forward of all red wines, making them a highly approachable and flexible beverage choice. Merlot’s lush fruity notes often include flavors like:

Merlots tend to receive medium-age barrel processing, meaning they age a minimum of eight to 12 months. It’s just enough time to introduce more decadent, in-depth sweet notes to the varietal, reminiscent of cocoa beans, espresso powder and even smoke. The oak aging further softens the tannins in the merlot. 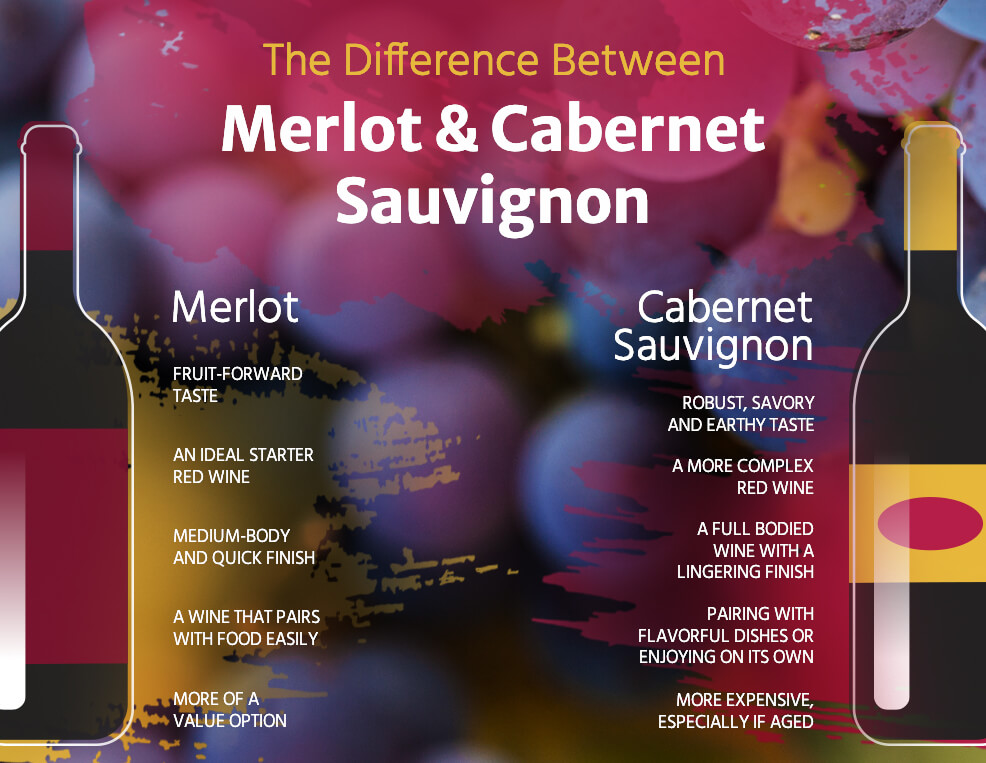 Merlot Compared to Cabernet Sauvignon: How to Pick Between and Differentiate the Two

Cabernet sauvignon and merlot can be confusing given their shared lineage and some congruent characteristics. To complicate matters, both comprise the signature base of Bordeaux blends, a popular red wine mixture that aims to highlight the best of both these varietals.

What’s the real difference between merlot and cabernet sauvignon — and how do you know which to pick for a particular meal, event or nightcap? Find out once and for all with this merlot/cabernet sauvignon comparison.

Both merlot and cabernet sauvignon derive from the same parent grape — the cabernet franc. Sharing a branch on the family vine means these two varietals maintain a handful of similarities, namely when it comes to their color, strength and dryness levels:

Like any siblings, merlot and cabernet sauvignon maintain significant differences:

When to Pick a Merlot

Opt for a bright bottle of merlot next time you or your friends are in the following situations:

When to Pick a Cabernet Sauvignon

Go for a delicious bottle of cabernet sauvignon if you or your party:

The world of red wines is rich, fascinating and — at times — overwhelming. At Marketview Liquor, we offer an extensive, yet approachable catalog of cabernet sauvignons and merlots both in-store and online, available to ship directly to your front door. Make your red wine comparisons easier with our online search features, filtering everything from price and points to subregions and vintage years. Browse our online selection, order your next wine case of merlot, cabernet sauvignon or both and give these delicious, complex wines a try!

You must be of legal drinking age to enter this site.